After only being in Florence for two days, I took off for Matera for the Womens Fiction Festival in Matera. On Friday, I took a taxi to the stazione (train station) at 3:15am to catch a bus to go to the Pisa airport. The sun was still not up by the time we took off to head to Bari. I watched the sun rise from the airplane over billowy clouds. 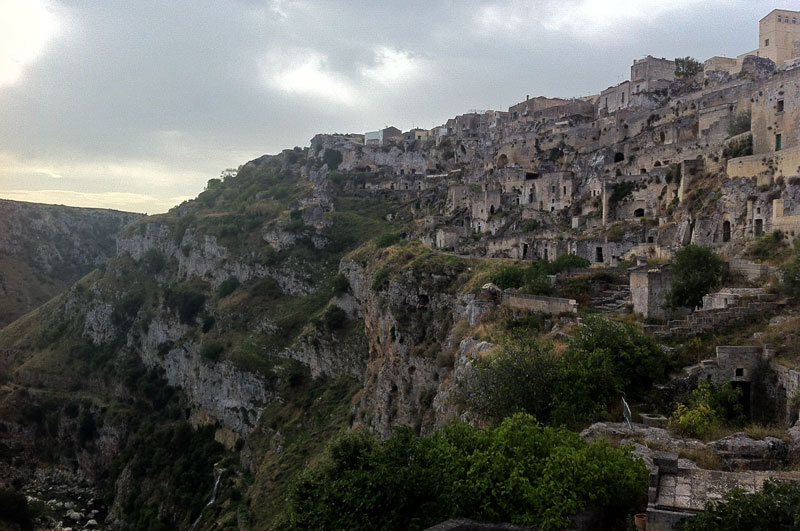 When I arrived in Bari, the autista (driver) who was supposed to be there to pick me up hadnt arrived. I watched as almost everyone from my plane walked to the bar (coffee bar) to have a caffè (coffee) and a pasto (pastry). I was surprised to see that they fill the cornetto (croissant) with cream on demand and that they had pane al cioccolato (pain au chocolat/chocolate croissant). I stood at the bar and drank my cappuccino and let the crumbs fall to the floor from my pane al cioccolato. After I was done eating, I called the autista and he said he was coming in.

He drove me to Matera where I arrived at the hotel, which is located in the Sassi di Matera. I have come to Matera once before a few years ago when I went to see my grandmothers birthplace, Craco.

I met up with my friend who is a literary agent who was speaking at the conferenza. We walked up the white, slippery, stone steps to the hotel where it was being held so I could check in. I met a few writers and translators on the first day, but met more people the next two days. I was pleased to have met not only Italian writers, but also English-speaking writers living in France, England, and Italy.

The presentazioni (presentations) were not only informative, but also motivating and inspiring. It was a joy to listen to agents, publishers, and published authors speak about the ever-changing process. The main message was that it is not only possible to publish the books that each one of us wants to write, but also that we shouldnt let anything hold us back. It seems as if the publishing industry has changed just enough that now much of the power is in the hands of the writers these days.

Both the conferenza and the city of Matera have been inspiring to me. My friend and I have met some amazingly generous and kind people here during our stay. The city, which seems as if it had been carved out of the rock that it sits on, seems to have instilled me with more courage and perseverance. As if the stones have somehow passed on their qualities.

While I have been here, I have taken many photos that I posted on Instagram. I find that the sun, nature, and the city blend so well together.

I wondered initially if it would be a good idea to attend this conferenza because it is so far from Florence, and not easy to get to, but I am so happy that I came. The city, locals as well as the writers, agents, and publishers have transformed me these last few days. I hope the other attendees feel as motivated and inspired as I do. I know that many of us will keep in touch and I hope good news will be shared between us.