Because I live with my beau in the suburbs of Paris, I feel as if I am completely out of touch with it now. We go in from time to time, but it feels more like a quick visit to do something specific, eat out, visit a museum, or go shopping. Each time I go, I never feel as if I have much time to truly enjoy the city, connect with it, and bask in it. I love to feel the rhythm of a place as it flows through me by watching the sun as it progresses through the sky, admiring the change in colors of the buildings, and breathing in the air. 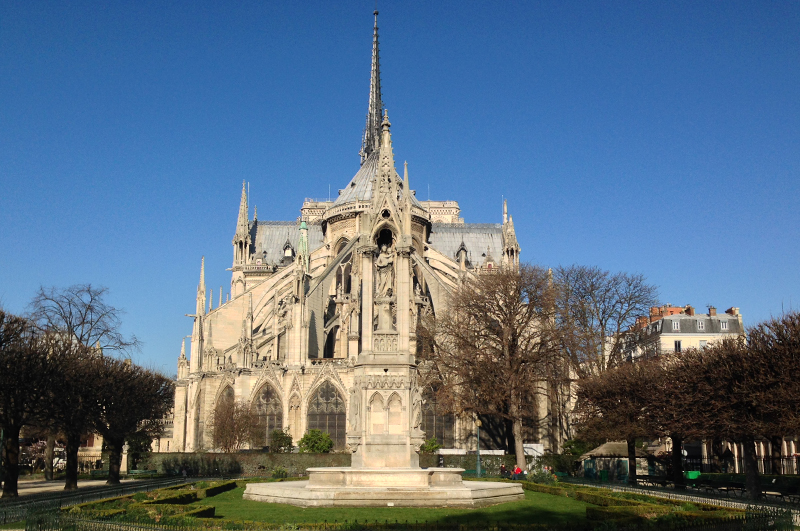 This weekend, I reserved a hotel room for us on the Île Saint-Louis. I love this island because its in the middle of Paris and the Seine flows on both sides of it. I love being not on the rive gauche (left bank) or on the rive droite (right bank), but in the heart of the city where we had to choice of going anywhere we wanted.

As soon as we arrived at the hotel after lunch, we dropped off our bag and headed outside immediately. It was so warm outside that we took off our jackets. It was certainly the first time this year that we dared go outside without a jacket on. Some people were already in tank tops while others still had a jacket on; we were somewhere in the middle. We were a bit surprised by how crowded the streets were, especially the long lines at any place that sold Berthillon ice cream. The weather was that warm, that an ice cream was definitely what you craved.

We crossed the bridge linking Île Saint-Louis and Île de la Cité, walked behind Notre-Dame, and headed straight for the Quartier Latin. We went to a few places where I used to go to often when I was alone in Paris on the weekends. We went to Shakespeare and Company to check out the books and then made our way through the narrow street with all the gyros/kebab and fondue restaurants.

We went to an herboristerie (herablists shop) where they have remedies for anything and everything, from reducing stress to relieving allergy symptoms. Afterwards, we continued on the rue Saint-André des Arts and turned onto rue des Grands Augustins to go to Mariage Frères. Ever since Ive moved to Paris, I have become a tea lover. When Im in Italy, I love the coffee, but in Paris, I prefer to drink tea.

We then walked across the Seine to go to BHV, which is a large department store frequented more by locals than tourists generally. I wanted to buy a thermos for my tea cools down faster than I can drink it when Im writing in the morning. I didnt find anything, but was mesmerized by the items on display. I could easily get lost in the BHV just going floor by floor to see what they have.

We went back to Île Saint-Louis to get massages before dinner. After all of the running around, we were both extremely happy to have made a reservation the day before. When we walked out, the sun was just setting, the cool air brushed against my face, and the streets on the Île Saint-Louis had cleared out a little bit. The streets were so empty that there wasnt anyone in line to get ice cream either.

We enjoyed our meal at a restaurant on the Île Saint-Louis just down the street form the hotel. I was happy that we didnt reserve somewhere else because I was quite relaxed after the massage. Afterwards, we quickly strolled around the island to see the city lights shimmer on the Seine. The streets were virtually silent after the days tourist traffic.

On Sunday morning, I leaped out of bed and couldnt wait to get the day started. The cool morning air felt good against my face as the sun was warming it up. We walked to Notre Dame to light a few candles and then took the metro to the Jardin des Tuileries. We walked through the gardens where people were soaking up the sun on green chairs near the water fountains. We headed to the Musée de lOrangerie to see Monets Les Nymphéas (Water lilies). I hadnt been in many years and I wanted to go back since they made some modifications to the building in 2006.

We then walked to the Jardin du Palais-Royal in the hopes of getting a drink at an outside café, but they were all full. We walked down to rue Montorgueil where there are a lot of sidewalk cafés, restaurants, and fine food shops.

To end our day, we walked through Les Halles to see the progress they are making on the Forum des Halles, and then back to Île Saint-Louis to pick up our bag.

We were exhausted by the time we plopped down on the metro seats. The train whisked us back to the suburbs in just twenty minutes. Throughout the ride and well into the evening, I kept thinking about our time in Paris. I took a few photos while we were there, but nothing truly captured the time I was able to connect with Paris and feel the city beat inside of me.