Autumn should have arrived a few weeks ago in both Florence and Paris. When I was in Florence for the past two weeks, the trees still had green leaves on them and only a few had changed colors and had fallen to the ground. I was hopeful to find autumn in full swing. Initially, it was more of an Indian summer. 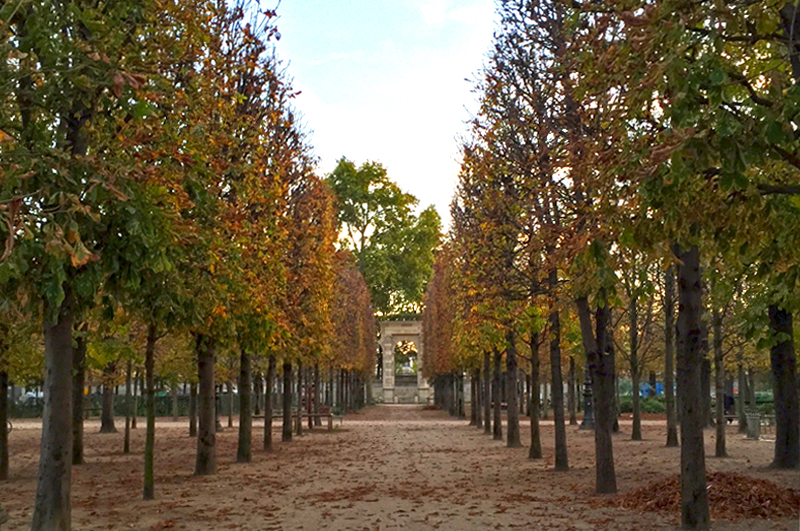 Over that first weekend in Florence, I was able to wear a sleeveless dress and sandals with only a light scarf around my neck. I knew that the warm weather wouldnt last, so I wanted to enjoy it while it lasted. That second week in Florence, the temperatures dropped a bit. It was chillier than I expected and ended up missing a soccer match because I didnt have a warm enough jacket to wear.

The sun still shined brightly during the day, but the minute you were in the shade, you were quickly reminded it was autumn.

I imagined that it would be even cooler in France, but when I arrived, it was exceptionally warm. On Friday, we hopped on the metro to walk around the Jardin des Tuileries in the hopes of seeing some autumn colors. Unfortunately, autumn hadnt fully settled in yet either as you can see in the photo.

This morning, we went for a run and even though the temperatures were mild for the season, some of the leaves had changed color and were falling off the trees as we ran by.

We later went to the Champ de Mars, the park around the Eiffel Tower, to sit and read on a bench while the weather was still mild. We werent the only ones who had the idea to sit in the park. We searched for a bench and passed children playing together and riding ponies as well as groups of people sitting on the grassy areas.

It was a relaxing Saturday afternoon, and probably one of the last ones with rather mild temperatures. Everyone must know this already in Paris, which is why people were out sitting on terraces and walking in the parks to take full advantage of the mild temperatures.