My run up to Piazzale Michelangiolo the other day was a bit challenging because I hadnt done it in a few weeks, but today it ended up being even more challenging. The other day, I had to prepare myself mentally yet today I had to push my body more. My run was going well until I reached the long stretch of stone sidewalk in the middle of the incline. It was warmer this morning and the sun was shining on the right side of my body. I looked out at the valley for a split second and thought about walking instead to take in the view. was an excuse for me because I just didnt think I was going to make it to the curve in the road much less up to the piazzale (large piazza). But, theres one thing I learned from running and that is when the going gets tough, you either shift gears or shift focus. 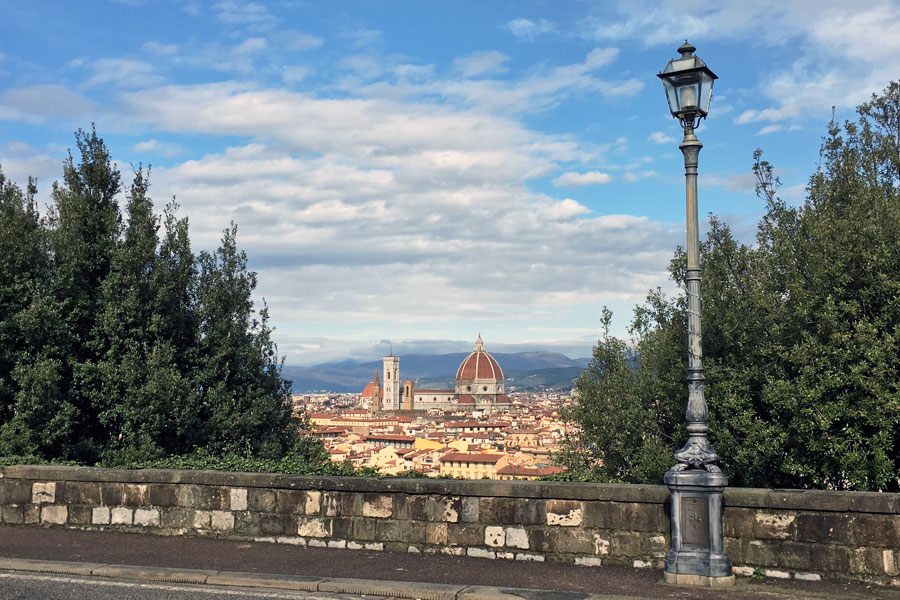 Usually when I run, I have a couple of landmarks on my path that help me know how far Ive gone and also push me to continue running. On days, like today, when my body didnt seem strong enough, I have to create other landmarks that arent so far away. Instead of looking at the curve in the road, which was only about 50 meters away, I shifted my focus to a tree about 5 meters away. When I looked up and didnt see the curve getting any closer, I focused only a meter from my feet.

I had to keep telling myself that I could make it. I continued pushing myself to just run one more step and then another. When I finally made it to the curve, I took in a deep breath and looked up to set another short-term goal for myself. The next goal was the campeggio (campground). I knew that if I made it to that point, I could sprint the rest of the way up to the piazzale. When I finally arrived up at the piazzale, I was almost surprised because just a few minutes earlier I was going to abandon my run completely.

Running has taught me that when things get tough, I have only two options: slow down or make smaller goals. Never, ever stop because once you lose momentum, its incredibly difficult to start up again. When I ran a half-marathon a couple of years ago, I found my rhythm and was running free. Then, my mind kicked in and said that Id never make it another six kilometers. I wasnt going to stop and walk six kilometers to the finish line. I knew that I had to focus on something close, like a car or even a tree, instead of the kilometer signs in the distance to build up my confidence to continue.

In both running and writing when things get challenging, I focus on a smaller goal as a step toward the ultimate goal. I do the same now with my writing. Sometimes when I dont think I can achieve the ultimate goal, like completing a writing project, I concentrate on achieving smaller goals, like pieces of the project. I keep my ultimate goal in mind, but I concentrate instead on the sentence, the paragraph, the page, or the chapter that Im working on.

A couple of weeks ago, I printed out the first draft of my novel and began editing it. It started out easy. I gleefully jotted down a few notes and made a few edits to the first thirty pages. However, when I went back to type up my edits I felt overwhelmed. It took much more time and effort than I initially thought. I stopped working on my novel until I realized that I should try to work chapter by chapter instead of thinking I could tackle the entire novel at one go. Sometimes that works great, but I know that if I feel a little disenchanted, I shift my focus on just one scene instead.

I feel like I have a better grasp on my novel now that Im working on one chapter at a time, or even one scene at a time. I find it easier to break it down into smaller pieces of writing when I begin losing steam. I need to feel satisfied with the smaller accomplishments I make because if I focus only on the completion of another draft of my novel, I might not feel gratified for months.

When Im running, I know that ultimately no matter I will make it to the piazzale if I focus on going one step at a time. And when Im writing, I know that I will complete my project if I just focus on one chapter (or even one scene) at a time. Perseverance always leads to progress.