When we got on the two-wagon train this morning, I didnt think the day would go well. The platform was packed with people going to Siena and the train was so small people were standing in the aisles. I was one of the lucky ones seated with my beau at my feet. We got off a couple of stops before Siena at Poggibonsi to catch a bus to San Gimigniano. I hadnt been back to visit this Tuscan hillside town in years and was eager to take my beau there. 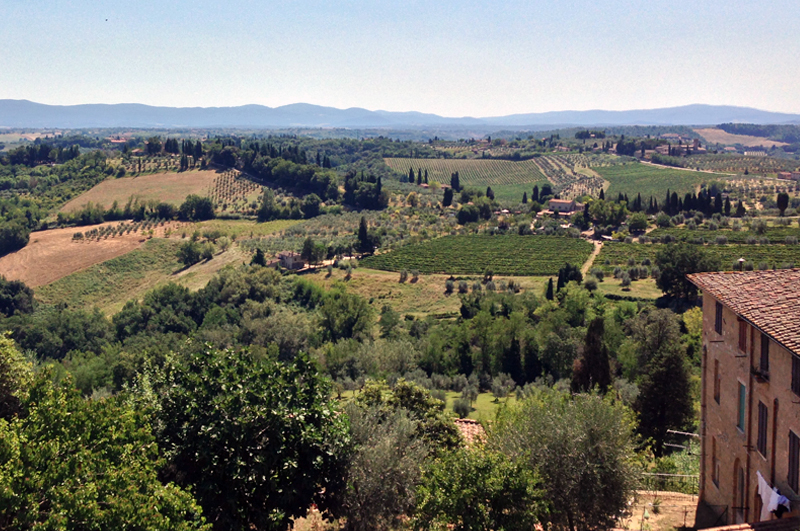 The bus pulled up only a few minutes later at the fermata dellautobus (bus stop) in front of the stazione (train station) in Poggibosni and took us through the lovely Tuscan countryside where vineyards were lined up. I took a photo of the girasoli (sunflowers) from the buss window because they took my breath away (and I didnt think the bus driver would want to stop to let me take a photo).

At the top of the collina (hill) was a small piazza that led to the one of the open doors of San Gimigniano. Walking through Porta San Giovanni felt like entering a time machine. We were directed down the cobblestone street, via San Giovanni, where stone buildings guided us toward the center of town and to the Duomo. I find San Gimigniano to be one of the most enchanting Tuscan towns.

We found a restaurant with a spectacular view when we arrived, but continued our journey through town before pranzo (lunch). When we arrived around 2 pm, we were happy to have been seated at one of the few tables up against the large glass windows and even more fortunate to have the windows that opened up to the Tuscan countryside.

After lunch, we hopped on another bus to go to Siena. At first we were just going to go back to Poggibonsi to pick up the train to Siena, but both wanted to see more of the countryside in the luxury of an air conditioned bus.

Our main purpose to go to Siena was to see the Palio. When I found out that the Palio was going to take place the same weekend my beau was in Florence, I suggested that we go to it although I really had no idea what I was getting myself into. In the end, I figured it was definitely a once in a lifetime event that should not be passed up.

We followed the crowds around the Piazza del Campo until we reached a large crowd of people under the Entrata pubblica (public entrance). Signs warned us of not bringing children and that there was no water or toilets where we were going, which I didnt know where that would be. We were already crammed in together with hundreds of other people and then when we entered a narrower passageway, some people began pushing. At one point, my body was leaning forward and my legs were behind me. I became a bit worried that this what I was going to have to endure for two more hours.

Fortunately, once we entered the area in the middle of the piazza, there was more space. From photos Ive seen, it looked like people were all squeezed in together, but I only saw people packed in like that around the edges of the piazza.

We found a place in the shade and watched as the ceremony went around the piazza. The crowds cheered when the horses exited the palazzo and entered the track. We watched as the riders talked to one another, most likely discussing strategy, and then lined up. When the riders took off on their horses, we turned ourselves around 360° to watch them. It was extremely exciting, but only lasted a few minutes. The Contrada dellOnda (Onda team) won the Palio and the people cheered.

Within minutes, we exited the piazza and walked past the Duomo where the winner was going to be. We didnt stay long and instead rushed to the bus stop to make sure we got on a bus back to Florence to beat the traffic.

On the bus back to Florence, I went over the day we had and was so happy to have spent a day in Tuscany, visiting one town and experiencing a historical race in another. When we arrived in Florence, the air was still warm and it was a joy to walk the streets without a sweater or scarf.

We walked to Piazza Santo Spirito to have dinner on one a terrazza (terrace) to enjoy the summer evening. Even though the beginning of the day wasnt ideal, the rest of the day went smoothly: all the public transportation was perfect) and we didnt get trampled in the piazza in Siena.