Thirteen years ago today my mom passed away. It sounds like a long time ago especially so much has happened in that time; however, with so many memories still vibrant in my mind, it seems like yesterday. To pay homage to my mom, I decided on going to Père Lachaise Cemetry. I had never visited the cimitière (cemetery) before although I did hear about many of the famous people who are buried there, like Jim Morrison, Edith Piaf, Honoré de Balzac, Colette, Oscar Wilde, and many more. 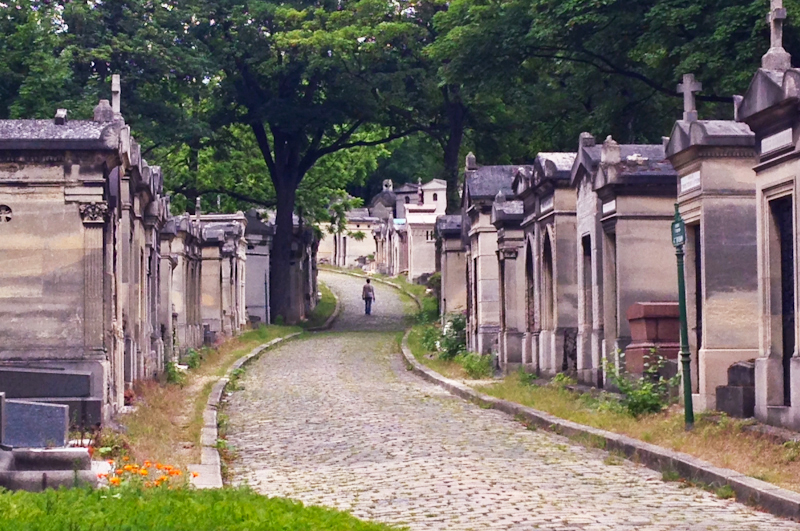 We first went to a restaurant in the 17th arrondissement for brunch. As an expat, I sometimes crave some of the foods that I grew up on. After all these years, I have learned to make almost all the American foods that I like, even bagels. When you dont have easy access to the things you miss, you get creative. Nowadays, finding brunch in Paris and Florence has become much easier. Its a real treat to go out for brunch and enjoy it. The only hard part is finding a good place.

After brunch, we walked to Parc Monceau where I lived for many years when I was first an expat in Paris back in 1990. I used to run around the park in the mornings before going to work. It was a joy for me to stroll through the park with my beau because I never had the opportunity before today. I always either ran around it or walked through it to go to work.

We hopped on the metro at Villiers where both metro lines have a stop at Père Lachaise. We chose on taking the one with fewer stops and arrived only about 20 minutes later.

When we exited the metro, we saw a small opening in a tall wall across the street. Without any signs, we knew it was the cimitière. We walked up the steps and saw some people huddled around a map that indicated the names and locations of those buried at the cimitière. We saw a few of the graves we wanted to visit, but I had to eventually download an app on my iPhone to find them.

Even though I had planned on visiting Père Lachaise many times over the past three years, today was probably the perfect day for it. My beau and I walked down the cobblestone paths surrounded by graves and mausoleums on both sides of us. I didnt feel sad as I thought I would, but I felt a strong sense of peace and love.

We first visited some of the graves of the people we were most interested in and then just walked down the different chemins (paths) to pay homage to all the others that reside there now. Not only did I want to be in the cimitière to pay homage to my mother, but also to those who are buried in Père Lachaise.

My visit to Père Lachaise reminded me that the people we keep in our hearts arent those who accomplished something of importance, but those who touched us in some way. May the music, words, and actions of those who have departed continue to touch, inspire, and motivate us to share more love and joy to those around us today.