After my three-week stint in California, I wasnt able to settle back into my normal life right away. The day after I returned, my beau and I moved into my friend's apartment in the 3rd arrondissement between the Marais and the Place de la République. For six days while she and her family were away, we lived in their Parisian apartment in a typical Haussmann building. Even though I wanted to ground myself after being away so long, I was willing to put that off so we could stay in Paris. 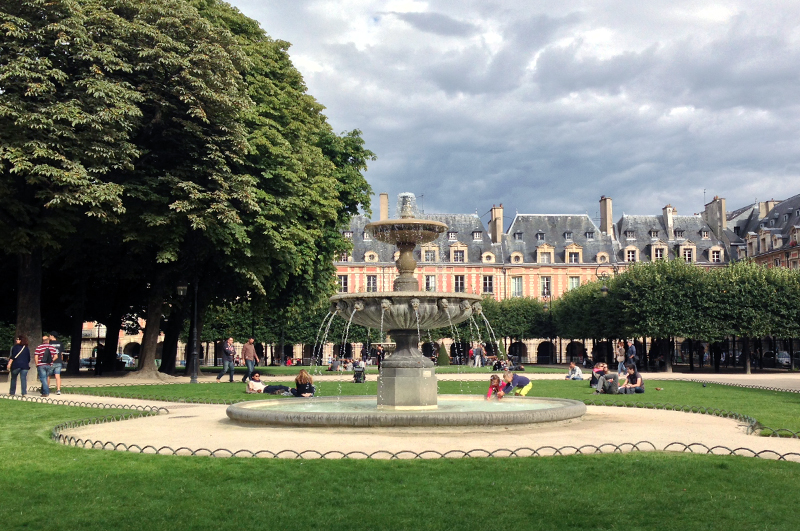 My beau and I live just outside of Paris, near La Défense, but I miss living in Paris. So much so that since January we have been looking for an apartment in Paris. It hasnt been easy because each one of us only knows certain areas. When I first lived in Paris, I was in the 17th and since Ive been working in Paris these last three and a half years, Ive been in the 7th arrondissement. I loved waking up early in the morning to run around the Champ de Mars where the Eiffel Tower is.

After we unpacked our bags in our Parisian home, we walked to Monoprix (a grocery store) to get a few groceries, and then acquainted ourselves with the neighborhood. We stumbled upon one of the oldest open-air markets in Paris Le Marché des Enfants-Rouges, perused the local cafés and shops, and picked out a few restaurants that looked appealing to us.

During the week, we commuted to work on the métro. While its not always a lovely experience, I do find it so efficient to go somewhere. I prefer taking the métro instead of driving a car. Commuting is not something I enjoy, but its more bearable for me when I get to take public transportation.

On Saturday, we tried out Vélib, which is a bike-sharing system in Paris. Within just a few minutes, we unlocked our bikes and rode them to Ile Saint-Louis. I had never biked in Paris before and I found it quite liberating. Luckily, it was August when there are fewer cars on the streets. But most of the side streets were rather quiet so it was quite enjoyable. After we dropped off the bikes, we visited our favorite spots and then picked up two other bikes to go to a Korean restaurant on rue Thérèse (near the Opéra) where there are a lot of Japanese and Korean restaurants.

To take full advantage of our time in Paris, we took Wednesday off from work. We didnt have any plans except to investigate a little bit more the neighborhood. You think you know a place because you visit it on the weekend, but when its always interesting to visit during the week too. We walked along the Canal Saint Martin where we had lunch at a vegan restaurant and then visited the Marais a bit more by strolling around the Place des Vosges (shown in my photo).

When we returned to our apartment on Thursday, I was a bit sad. The energy of the city fades as we drove out of the city limits. While originally I was pretty convinced that the 7th was perfect for us, Im now considering the 3rd. I always love areas where there are markets, shops, and restaurants within close proximity like what I have in Florence. Unfortunately, there wasnt a park where I could go running, but with the Vélib, I could take it anywhere I wanted and go running.