Before the end of 2014, my beau and I decided to take a trip to Venice. I was happy when he suggested it for two reasons: I hadnt been there in a long time and I needed a break from the flip-flopping between my two cities. I wanted to go someplace where I could prepare myself for the New Year. I love Florence and Paris and am stimulated by them, but its always nice to experience a different place. In that way, Im able to keep myself open and more flexible for the arrival of 2015. 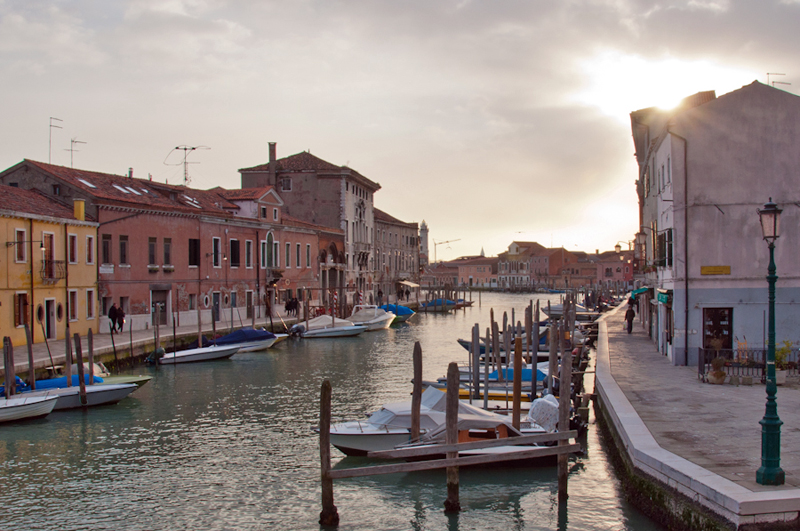 On Saturday, we flew from Paris to Florence and then took a train to Venice the next morning. While our train headed north through Bologna, we saw the snow as it was falling. It was only one patch of snowy weather because when we arrived in Venice, the skies were clear. The first thing I did when we arrived at the train station was exit it so that we could stand above the Canal Grande. He had never arrived in Venice by train before and he was amazed with the stunning view.

I dont know Venice very well and have only visited a few times. It is the only city where I get lost more with a map than without one. I usually just follow the big signs that point us in one of four directions: San Marco, Accademia, Ferrovia, and Rialto. We, of course, got lost, but eventually we would make it to where we wanted to go. Its more a question of letting go and begin led by the streets in Venice.

I love taking the vaporetto even though its not the fastest way to get around the central parts of Venice. I love floating on the water, bumping into vaporetto stop, and then drifting away from it. I always feel as if I have to let go of the reins to enjoy my time in Venice. To not get bogged down by time because it seems navigating the city just takes longer. Its not like Florence where I get to where I want to go on foot. I know the streets to avoid tourist/pedestrian traffic. And in the high tourist season, I add five minutes.

We were able to hit all the major stops like the Rialto Bridge, Piazza San Marco, Bridge of Sighs, and the Doges Palace, but my favorite part about being in Venice is to walk around the different areas. I was also happy to see one of my dearest friends who lives in Venice. The night before we had planned to meet, we bumped into each other as we were boarding the vaporetto. It was completely unexpected for us both. Had we been in Florence, I wouldve almost expected it.

For the first time, I went to Murano after taking the vaporetto from the train station. Im probably an odd traveler because I rarely read up on a place much before going. I prefer to discover a place on my without any preconceived notions or ideas. Almost like a person I meet. I prefer to not know much so that I discover the person as he/she is. I guess I prefer a more personal approach to visiting a new place.

We ended up spending the entire day in Murano. I took quite a few photos (including the one at the beginning of this blog post). There was something special about Murano that I enjoyed. Maybe it was the light or the feeling of it being rather remote that appealed to me. I enjoyed just walking around the island and being surrounded by water. We werent able to see any of the glassmakers because the fornaci (furnaces) were closed. I was a little disappointed, but Ill just have to return another time to Murano and then go to Burano as well. I love the water, but after a while, Im not that comfortable with feeling surrounded by it. I prefer the Arno that flows through Florence and the Seine in Paris. I am ready for 2015 and my trip to Venice was exactly what I needed.